Is there ANYONE left in dance music with principles? MDL Beast Soundstorm 2021 lineup is like the McDonald’s of festivals – and the number of DJs prepared to accept Saudi blood money will shock you… 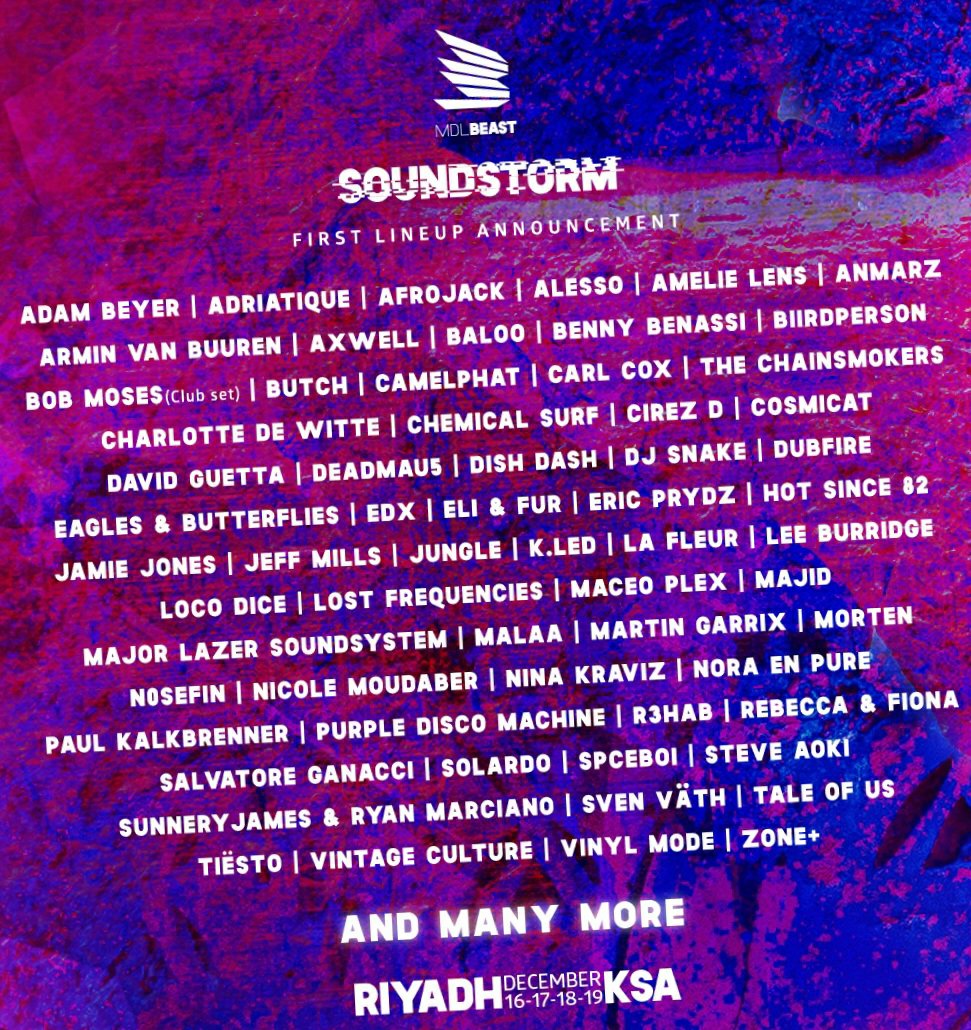 Back on September 6th, this blog posed a question. Do DJs care more about their bank balances than anything else in the world? For those in the upper echelons of dance music, the answer is – bar the odd exception – yes. Hence why they’re happy to do gigs in Texas at a time when a woman’s right to abortion services was being threatened.

I’ve also commented recently about how the big festivals are essentially one giant McDonald’s style franchise. Most of them are organised by a small handful of companies. No matter which one you go to, the lineup is much the same. A steady supply of Big Macs for those on the bill, scraps of a Filet-O-Fish for everyone else.

The superstar DJs of the 90s were frequently accused of greed – generally correctly too – but this new generation takes it to new, utterly shameless levels. Which is why seeing the likes of Carl Cox, David Guetta, Charlotte De Witte and Sven Väth on the bill for MDL Beast Soundstorm, due to take place between December 16th and 19th, really should surprise no one…

But notice the location of this event – Riyadh, the capital city of Saudi Arabia. To many out there, the first thing that springs to mind when hearing this country’s name are human rights abuses. These are documented extensively by Human Rights Watch and many others.

For example, the country does not recognise LGBT rights. Homosexuality can be punished by death. The practice of any religion other than Islam is illegal. Tens of thousands are being held by the state in prisons with no idea why. And when journalists are brutally murdered, the regime lies about it.

But the DJs on this lineup obviously aren’t interested in any of that. After all, why would they be bothered by the fact they’re being used by the Saudi government to whitewash their human rights record? It appears their priorities are their own bank balances – they want them filled back up and they don’t care where the money comes from.

And guess what? That’s exactly what’s happening here. Every single DJ on this list is being used as a propaganda tool by the Saudi government – who do they think is paying for this festival? Step forward, The General Entertainment Authority for the Kingdom of Saudi Arabia.

At least one or two DJs on this lineup must have a conscience. They should rethink their decision to appear at this propaganda event – and that’s putting it very mildly…

2 thought on “Is there ANYONE left in dance music with principles? MDL Beast Soundstorm 2021 lineup is like the McDonald’s of festivals – and the number of DJs prepared to accept Saudi blood money will shock you…”