Isn’t it nice to know Comical Ali found a new job after the Iraq war? Music producer who’s clearly never read this blog has come up with a novel way to end the UK garage schism – let’s just stop reporting on it… 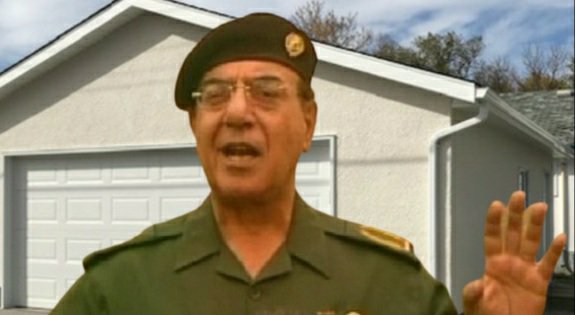 Back in 2003 during the Iraq war, a figure whom the public quickly came to know was Muhammad Saeed al-Sahhaf. He was the Iraqi government’s Information Minister and was known in the press as Comical Ali due to his ridiculous claims during daily briefings to the world’s press.

On one occasion whilst doing a press conference in view of American soldiers standing under giant crossed swords in Saddam Hussein’s parade grounds in Baghdad, he simply said “There you can see, there is nothing going on”. Or when shown footage of Iraqi soldiers surrendering, he denied that they were Iraqi soldiers in the first place.

I’m pleased to be able to report that Comical Ali now has a job as an occasional producer of garage house, as well as several other sub-genres of house music. This person – whom I’m giving anonymity to for now – got in touch yesterday after my latest article slating the divides within garage music.

This individual believes that “all this focus on so-called splits and divides is wrong. I honestly think you exaggerate half this s*** to get hits on your blog. These divides might be fixed if you stopped f***ing writing about them”. Oh, and “your coverage of the genre is s*** anyway”.

So much so that you expended actual energy emailing this blog to tell me. Apparently, not reporting on things makes them stop. In which case, I shall immediately phone the world’s media and tell them to stop reporting on Covid-19 – the pandemic will then presumably be a thing of the past by teatime on Thursday.

How some of these people remember to breathe is beyond me…