McDonald’s have the same menu everywhere too! Secret Project tickets for Portugal go on sale tomorrow – and the lineup is as stale as a three day old Big Mac… 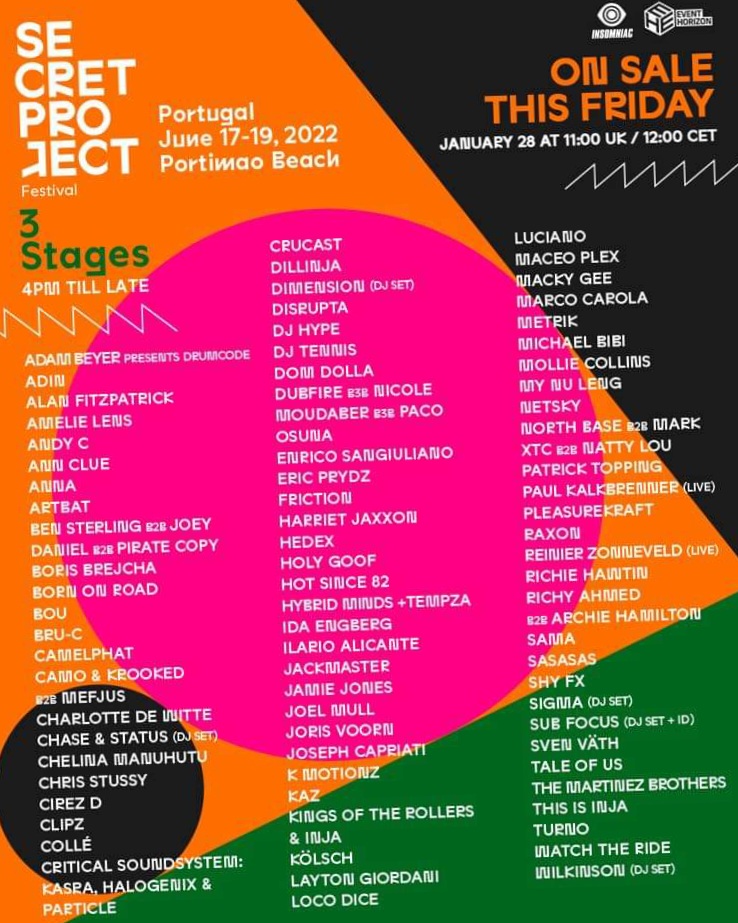 During the heights of the MDL Beast Soundstorm festival controversy last year, I described the event as being “like the McDonald’s of festivals”. I was commenting on what I was seeing as festivals started to come back during last year – and one thing was very noticeable.

Many of the big festivals essentially have the same lineups. This is great news if you’re a DJ due to the earning opportunities – if you’re on the radar of one of these festivals, many of the others are going to book you as well. But it’s not such good news for anyone who likes diversity in the music scene.

So what’s behind this? As far as I can tell, it’s mostly a combination of two things. One is festivals being on their knees financially and going all out to survive by just booking names they know will sell tickets. And two is the increasingly large DJ agencies – one of whom is rumoured to insist on a minimum number of their acts being booked for such events.

In recent days, the Secret Project Festival has been advertising heavily on social media ahead of tickets being available from tomorrow. A lucky few who like to be musically fed from the same menu of fast food DJs – they fulfill a short term craving, but you’re hungry again soon enough – get a two hour slot to themselves before the gates are opened to everyone later.

But just take one look at the lineup. Dear oh dear…

I apologise unreservedly for the smell – it’s the notably smug whiff of business techno that your noses also detect. Brilliant for the DJs on it who practically have a unionised, jobs for the boys arrangement – not so good for anyone hoping for something a little different or something they haven’t heard before.

No matter which one of the big festivals you look at, the lineups are almost the same. This is a blatant attempt at profiteering from the festivals and it’s soon going to backfire on them. People aren’t stupid – there’s only so many times you can keep reselling them the same stuff until they get tired of it.

And even McDonald’s change their menus sometimes. Only this week, the British chain announced a number of items had been removed permanently from their breakfast menu. The festivals don’t yet appear to have cottoned on to this aspect of the fast food business – they still have some old favourites on their menus, but they are largely very different from what was on offer 20 years ago.

The big festivals might want to try and take a gamble with new talent sooner rather than later. Otherwise, they’ll eventually bear less resemblance to McDonald’s and more resemblance to Ratners Jewellery…